I fell in love with Alison Stone’s poetry in early 2014, when she submitted three pieces for inclusion in Arcana: the Tarot Poetry Anthology. In August of 2016—one year after Arcana’s release—Stone’s book of 78 Tarot poems, Ordinary Magic, was published by NYQ Books. I am delighted to recommend her collection to lovers of Tarot, myth, and language.

Each card of the Tarot deck is represented poetically in Ordinary Magic, and the book is split into five sections: the Major Arcana and the four suits of the Minor Arcana (Wands, Swords, Cups, and Pentacles). Stone’s poetic renderings—essentially one-card readings in verse—give the reader a deeper understanding of each card, which makes her book a wonderful resource for novice and experienced cartomancers alike.

Stone utilizes both free verse and formal structures throughout Ordinary Magic. For instance, her use of the ouroboros-like pantoum form beautifully reflects the Wheel of Fortune’s peripeteia, and the entire Major Arcana section comes full circle to include the same line—“zero is an egg that holds all numbers”—in the first poem (“0. The Fool”) and last poem (“XXI. The World”).

In the Minor Arcana section, mythical stories are cast alongside memories. One example is the story of a retired Hercules as the King of Wands placed a few card-poems away from a story about the narrator’s brother in the Ten of Wands. This juxtaposition shows how a reader can draw meaning from both modern and mythical storytelling; many experienced Tarot readers categorize quotidian stories as cards (“well, that was a Ten of Wands kind of day,” a Tarotist might say). Stone explicitly writes about this connection in her Six of Cups poems, titled “6. Missing”:

Memory’s turned you
mythic. The only one
to find the lake and show how wind
makes one rock’s ripples infinite.

This connection is also found in the theme of matrilineal bonds, which is threaded throughout the Minor Arcana poems. Lilith and her daughter appearing as the Queen of Pentacles and the Queen of Wands, respectively, are juxtaposed with the narrator’s daughter, mother, and grandmother appearing in poems about the Queen of Swords, Nine of Swords, Seven of Wands, and Four of Wands. The title of the latter, “Tether,” speaks to how the women are bound together, and Stone uses umbilical cord imagery to tie the metaphorical with a literal maternal link. She expands on this theme in her Nine of Pentacles poem, “My Mother Graduates from ‘Model Mugging’”:

I am back in childhood, the same person
as my mother, one woman
with two names.

Two of Cups from the Stone Tarot

In addition to storge (familial love), eros (romantic love) flows throughout the book, although this love is often fraught. When the Ten of Cups turns up in the poem titled “Tenth Anniversary,” love between the narrator and her husband “crouched just out of reach.” In the aforementioned Six of Cups poem and the poem about the Six of Pentacles (“First Pomegranate”), the narrator speaks of queer love, saying she “always thought” she “didn’t fancy women” but “no one is that heterosexual…your voice, your hair. / My hunger.”

In the non-mythic or modern-as-mythic poems, the narrator is a mature woman, aged “Forty-Seven” in the Four of Cups, who saw “Divorce Court” in the Three of Swords, and has lost her 92-year-old grandmother as well as her much younger mother. This is a welcome and uncommon narrator; we need more stories from women who are no longer twentysomethings, because the media is oversaturated and obsessed with women in their twenties.

Ordinary Magic is a beautiful collection of spiritual poems that are both lyric and narrative, just like the Tarot. If you are looking for a unique gift for the winter holidays, you can pick up Alison Stone’s book at Small Press Distribution.

Also, you can hear her read Tarot poems that appear in both Ordinary Magic and Arcana: the Tarot Poetry Anthology in the Listening Corner, and read more about Stone in her Featured Poet blog post and on her website.

Editor’s note: this year, I am featuring a different poet from the anthology each month. For February, Alison Stone shares some of her experiences with Tarot-inspired painting, poetry, and community. Without further ado, I turn the blog over to her.

Tarot, Poetry, and Me

I was introduced to the tarot in childhood, when a friend gave me a “tarot game” for my ninth or tenth birthday. Manufactured by one of the leading toy companies, it came in a bright purple box and contained a tarot deck, some poker chips, and instructions for both playing the game and using the cards for divination.

I was fascinated with the images and the idea that these cards could tell the future. Abandoning the game after a couple half-hearted attempts, I turned my energy to memorizing the cards’ meanings and their placement in the Celtic cross. The cards were Rider-Waite outlines, but colored differently, (tan instead of yellow, for example), probably to save money on printing. I felt that these strange drawings held secrets and was excited for them to be revealed.

Though I usually found memorization quite easy, especially if the subject interested me, I simply could not learn the cards’ meanings. Spacey and dull, I had no idea what they were trying to say. It was as if someone or something was telling me “no.” I put the cards away.

In my late teens, I bought several other decks and loved seeing the different ways artists interpreted each card. I also bought a variety of books on the tarot and began to study. Again, something odd happened. While I easily digested the material about tarot history and the overall meanings of the cards, when I tried to learn their divinatory messages or how the cards affected each other in a spread, I once more got the clear feeling that this was not for me.

One day I decided to paint my own interpretation of The Star, a card I felt particularly drawn to. When I finished, I started The Tower. At this point I made the decision to paint the 22 Major Arcana.

image, then read different commentaries, sometimes taking notes. Finally I would meditate on the energy of that particular card until I felt connected enough to begin an initial sketch. Several years later, I was finished and began showing the paintings. People asked if I was planning to reproduce them as a deck, drawn to the art but unable to afford a painting. My plan was to stop after the Majors. Maybe greeting cards? Posters? As though a teacher were chiding me for laziness, I got the clear message “Finish the deck.”

It took me ten years to complete the 78 paintings. Sometimes I got bored and wanted to quit. Other times my connection to the cards was scary, as when I set to work on the Nine of Swords, in a perfectly sunny mood, to suddenly find tears streaming down my face. I had the paintings produced as a deck, overseeing the process to make sure the colors, which were of primary importance to me, came through. Surely now, I thought, using the cards I had made, I would be capable of divination.

Disappointingly, the answer was again “no.” While I could recite the meanings of each card, my attempts at divination were clumsy and forced. On the other hand, the tarot healing work I was developing deepened and strengthened. Maybe, I thought, I had done what I needed to do with the tarot artistically and could move on to other projects.

I didn’t believe that for long. During the painting of the deck, a line had come to me — “this earth you drag your feet upon is paradise.” I wrote it down with the title The Empress but didn’t write from the tarot again until I had finished all the paintings. Then more lines revealed themselves and it became clear – my next task was tarot poetry.

My first encounter with the tarot in poetry was during freshman year of college, when I read

Eliot’s The Wasteland in a literature survey class. I had read little poetry, and had no interest in reading more, but this poem amazed me. Though I didn’t understand it, I was drawn into its mystery and music. The reference to the Hanged Man was one of my few anchors in trying to understand the text. I felt a grateful flash of recognition, like hearing English spoken while traveling abroad.

By the time I turned to writing my own tarot poems, I had been writing seriously for years and had my first book published. I read voraciously. While I rarely encountered the tarot in poems, the few instances when I did were unexpected delights.

I finished the 22 poems of the Major Arcana, got them published as a chapbook, and once more wondered if I was done. I wanted to write about other things. Tarot, however, had other ideas. Again it was clear that I needed to do all 78. As with the paintings, the process was sometimes organic and inspired; other times an exercise in determination and will.

That book, Ordinary Magic, is complete, but my stewardship to the tarot is not. I’m not sure where I’ll be led next. I’m pretty sure there’s a nonfiction book in my future, describing the tarot healing work I’ve been practicing with some of my therapy clients. This work has been evolving for years, but now doesn’t feel like the right time to write it down.

I think the next step in my tarot/poetry journey involves community. Thanks to the internet, tarot enthusiasts and poets are able to connect with unprecedented ease. The tarot poetry anthology brings a bunch of us together to let our words percolate and deepen their individual impact (thanks, Marjorie). It’s like Tarot is throwing a party and people from all over the world are coming together to celebrate and dance. I’m delighted to be on the guest list.

[Below is one of Alison’s poems that will be featured in the anthology.]

Of course moderation is a piece of cake
for me; I am an angel.
I have had eternity to master balance,
and besides, it’s easy to stay
calm in any storm
when a rainbow arcs perpetually
above my head like a giant umbrella.
I understand you are only human.
Still, why let yourself be bumped from center
by recycled heart hungers or the lust beast.
Throw away your book of rules. Stop boring everyone
with resolutions. Just plant
one foot on land, the other
in the cold school of the sea.

All photos of Alison’s work are used with permission. You can learn more about her Tarot deck at: www.stonetarot.com and her poetry at: www.stonepoetry.org

Also, check out Alison’s bio and information about the other poets who will be in the anthology here. 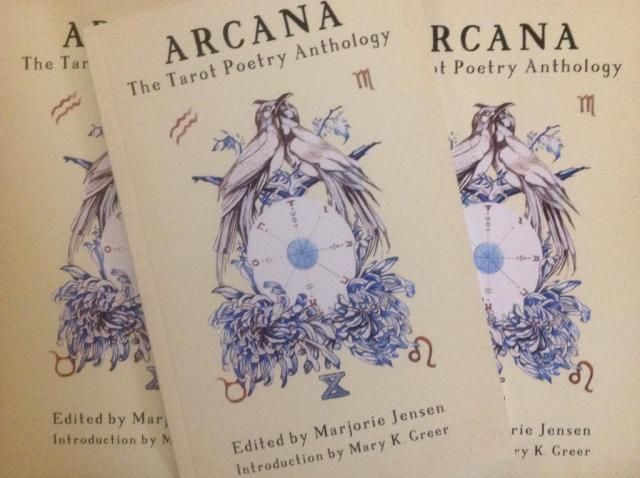