Marjorie Jensen: How are you doing this morning?

Sierra Nelson: I’m doing pretty well. It’s sunny but not yet too hot in Seattle. How are you doing?

MJ: Was the weather nicer in Italy? Or about the same this time of year?

SN: Much hotter in Italy! And the sun seems more powerful. But somehow in Italy I don’t mind it. Maybe it’s the gelato and siesta that make it seem more civilized. If it gets that hot in Seattle it seems unbearable. Even with ice cream.

MJ: Ah gelato and siesta! Where all did you get to go in Italy? You were based in Rome for the writing program, correct?

SN: Yes, Rome was the home base for the program (a creative writing intensive), with classrooms at University of Washington’s Rome Center. But we did some field trips outside of the city as a group, and also independently during a midpoint break. With the group I got to return to Il Parco dei Mostri (Park of Monsters, the late Renaissance garden of Bomarzo) in the Lazio region. And with my poet friends co-leading the program, Rebecca Hoogs and Johnny Horton, we visited Niki de Saint Phalle’s Tarot Garden in Tuscany during our break. (Which I had never been to before.)

MJ: This all sounds lovely! I’m fascinated by everything Italian (my Italian-American mom is the first generation in her family to be born in America). What was the Tarot Garden like?

SN: The tarot garden was interesting — like being able to walk around inside someone’s dream inspired by the major arcana. Niki de Saint Phalle was a French artist but she befriended some Italians who gave her the land to build her giant tarot-inspired sculptures and buildings. She began the project in the late 1970’s and built for decades. Her career began to take off in the 1960’s and I think you can feel that aesthetic in the work, especially in the colors. And the 1970’s too, with so many mirrors!

Niki de Saint Phalle’s Tarot Garden – The Sun and The Hierophant in the forefront, photo by Sierra Nelson

MJ: Ooo, the mirrors make me think of the Tyldwick Tarot. Do you bring a deck with you when you travel? Did you do any tarot readings in the Tarot Garden or other places in Italy?

SN: I do often travel with a deck, in case. Some trips I use them more than others. I actually didn’t do any readings at the tarot garden — it felt more like I was receiving a reading just by walking around the grounds. I loved how being there emphasized the journey and encounter aspects of the tarot. Exploring the grounds, you would suddenly come upon a strange building or large-scale figure and think, “Oh hello! Who is this? What are you trying to tell me?” It puts you in the role of the fool. (Maybe that’s why it felt joyful, even as some of her imagery was intense, and reading more about her and her life afterwards added to that sense of intensity.)

I did a few readings on this trip with the deck I had brought, but as a class we also made a deck together, divvying up all 78 cards as blank pages, and writing our own text (with optional drawings) while exploring the Parco dei Mostri and other field trip sites.

Then the group could ask questions of our collective set of cards / little poems throughout the program. It was fun.

MJ: How cool! I very much like the communal oracle as creative project! Which deck did you bring?

SN: This year I brought two decks — the Hanson Roberts deck (which I’ve had for quite awhile and am fond of) and the Wild Unknown, which I am just getting to know. When you travel do you bring a particular deck? And when you teach tarot poetry workshops, what are some of your favorite ways to approach the tarot-poetry hybrid space?

MJ: When traveling, I generally bring the Wizards Tarot and a second deck. I’ve been sending Tarot letters with single cards from the Wizards to my family and friends, and they like it when I come and read with the whole deck in person.

SN: What happens in a tarot letter? Do you send the actual card in the mail?

MJ: Yes! I originally had two copies of the Wizards deck, and one copy I split up and have been mailing with handwritten one-card readings. I taught this epistolary technique in one of my tarot writing workshops. But I think the best activity I’ve come up with is bringing in a bunch of decks and having students compare different versions of the same card to inspire their own poetic version of the card.

SN: Woa! That’s exciting, to receive the physical card itself in the mail. So eventually the split up deck depletes? The pack unfolds its story throughout time and the people you write to, until it’s all told?

SN: It is fun to compare versions of a card. It feels like etymology — each word carrying its typical usage, and historical threads, and sometimes new spins as well, reclaiming.

MJ: I feel like it puts the writer in the role of tarot artist — connects the visuals with language. And language springs from the visual — so etymological too!

SN: Which connects to my (admittedly biased) opinion that poets give the best tarot readings. Maybe because of the emphasis on image, rather than just interpretation. Poets create a little world from the symbols so that you can feel the details, and connect them to your own question or difficulty.

MJ: I agree! The best tarot readings are poetic.

SN: Yes! The poetic reading — the unfolding of the images is also part of it. I’m not saying I give the best tarot readings — but I’ve enjoyed more deeply readings from tarot readers I know who are also working poets.

MJ: There’s a lot of overlap! I’m interested in how some of the Arcana contributors primarily identify as tarot readers and how others are primarily working poets. Do you consider yourself primarily a writer or tarot reader?

SN: I definitely identify as a writer more than a tarot reader.

SN: I started writing poetry when I was about 7 and have always loved language. I studied literature as an undergrad with a creative writing emphasis, though it was probably not until after college that I thought of myself as a writer. For tarot, my aunt does readings for people and it’s always been something I’ve been curious about, but I think it wasn’t until college that I found a deck that I really took to and started to find it easier to do readings for myself and others. But I don’t know if I would identify myself as a tarot reader in the same way.

What about you — how did writing and tarot come into your life? When did they feel like they were more a part of you?

MJ: I like that tarot came to you through your aunt! It seems to often be a female tradition and one of the few fields dominated by women. My mom and (paternal) grandmother both read cards. Mom read tarot; grandma read playing cards. But my grandmother gave it up quickly after accurately predicting someone’s death (my mom kept it up somewhat after accurately predicting a death).

I’ve been writing little poems and things for as long as I can remember. Mom gave me my first tarot deck at 14. I think I really started to identify as a writer when I switched my major in college from dance to English (creative writing). This is kind of funny now, because I’m teaching choreographed ballroom dance instead of creative writing at the moment.

SN: There’s a lot of connection between dance and poetry too. Have you considered choreographing a series of tarot dances? That could be exciting!

MJ: I actually wrote an experimental piece using dance choreography that will be published this month! It’s coming out in the lit journal run by another Arcana contributor, Shloka.

I don’t want to take up too much of your time! But I would like to hear a little more about how you created one of the poems that’s in Arcana — “The Fours” — in the Italian Park of Monsters. Was this experience like the Tarot Garden in that the statues were your oracle?

And yes, the imagery in each of the sections of “The Fours” came from a different statue or area in the Bomarzo Park of Monsters. Keeping in mind each of the suits’ elements, I walked around the grounds until I found a statue that intrigued me and seemed somehow right. I then wrote about it, describing what I saw and considering the suit I was connecting it to, and from there I whittled down my notes to just one small moment or image. For example, the Four of Wands was inspired by this exciting sculpture: https://upload.wikimedia.org/wikipedia/commons/9/9b/Bomarzo_parco_mostri_orco.jpg

SN: I’m not sure if you can see it in the picture but on the upper lip of the giant’s mouth it says in Italian, “All Thoughts Fly.” 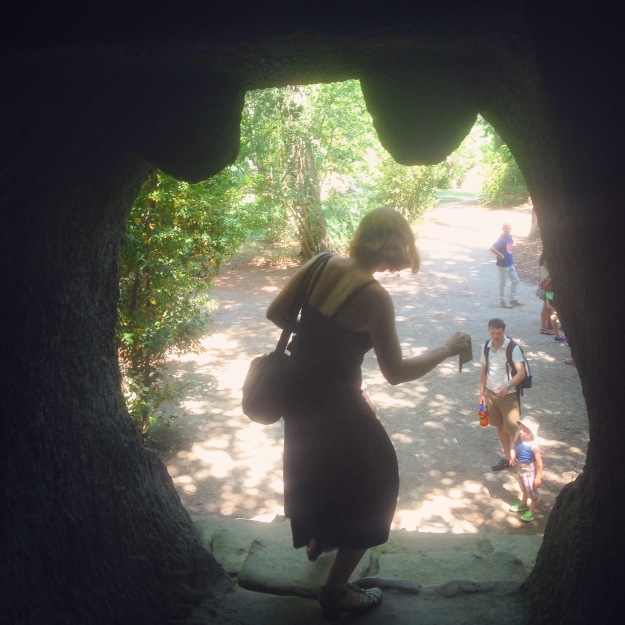 MJ: That’s amazing! I love that.

Thank you so much! I really appreciate you taking the time to talk with me.

SN: It’s been lovely getting this chance to talk with you too. Thank you for putting together such an inspiring anthology. It’s an honor to be a part of it.

MJ: It’s been such a wonderful experience for me to create the book! I’m going to commemorate it by getting a tattoo of the logo I’ve been using for it (my Twitter avatar, part of this image). Thanks again for being part of the book!

Here is one of the poems Sierra contributed to the anthology:

Bomarzo Parco dei Mostri – The Elephant (one of the statues that inspired “The Fours”), photo by Sierra Nelson

Four of Coins
You have stepped down from your niche
to compose a poem of shadows
while your fellow statues
work on their decomposition.

Four of Cups
Like a fish with human teeth
chomping merrily through the sea
your cup runneth over
the whole world.

Four of Wands
Everything you whisper inside the giant’s mouth
is amplified to everyone partying in the garden.
Not such a bad fate, my dear.
The giant’s tongue becomes our dancing table.

Four of Swords
Your ideas carry you like a dutiful elephant.
But look again:
how powerfully a trunk now has wound around you,
how ready to trample.

You can hear Sierra read “The Fours” here.

To learn more about Sierra, check out her website: http://songsforsquid.tumblr.com/

You can purchase Arcana: the Tarot Poetry Anthology through the publisher’s website, Elliott Bay Book Company, Amazon, and other stores.

1 thought on “A Conversation with Sierra Nelson”