Welcome to 2015! This year, I will be featuring one poet a month here on the blog. My first featured contributor is Enrique Enriquez, who generously agreed to answer some questions about Tarot and poetry.

Marjorie Jensen: What does your process for writing Tarot poetry look like? How is it similar to writing a Tarot reading? 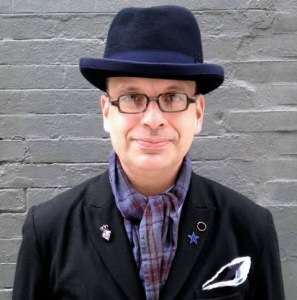 Enrique Enriquez: When the reader of a book reads the word ‘apple’, he fills that word with all the apples he has eaten. When a tarot reader looks at an apple he sees it as the crossing of a horizontal axis in which another apple became a seed, that seed became a tree, the tree gave us our apple, that in turn will dry down to its own seeds… and a vertical axis in which the Law of Gravity echoes the Fall of man. What if we could read a word as one reads the tarot? Then that word would predict its own fate, which is to turn itself into another word.

Maybe what I do isn’t poetry, but it is indistinguishable from poetry.

MJ: You use several different languages in your work. How many languages do your read/speak? What inspired you to create multilingual pieces?

EE: The best way to write with an open mind is by doing so in a language you can’t understand.

Language has an authority I am interested in dispelling. The first law of language is exclusion: only the ‘initiated’ in a language can speak it. But the membrane between languages isn’t consistently dense. Now and then it becomes thin so you can cross from one language to another one, from one “truth” to another. In those crossings you learn that there is a higher language whose rules supersede the particulars of all languages. This is the language of forms, some people call it the ‘language of the birds’.

MJ: Your poetry seems to have strong Oulipo influences. Could you talk a bit about your experience with Oulipo wordplay?

OuLiPo is the offspring of the College de ‘Pataphysique, which is an offspring of Alfred Jarry’s imagination. Jarry inherited a taste for wordplay from Rabelais, Tabourot, Villon, etc. Wordplay can be seen as a pataphysical way on interrogating a word. ’Pataphysics is important to me because it lends the eccentricity of literature to the assertiveness of science. That is how one could eventually reach symbolic speed, become imaginary.

‘Pataphysics addresses the rules that govern the language of forms: syzygy and clinamen. Syzygy accounts for the equivalence of forms, something we also hear expressed as ‘as above, so below’. Goethe said is best: “flowers are the stars of earth”. Clinamen speaks of exceptions: the swerve from these equivalences. A flower and a star mirror each other, but as mirrors they are mutually concave: the star enlarges all we know about a flower, the flower enlarges all we know about a star.

The space in between the flower and the star is the mandorla in The World card.

MJ: I’ve heard you’re an excellent card-handler. How would you compare card tricks–sleight of hand magic and even just the magic of casino dealers–with Tarot and poetry?

EE: By looking at tarot cards we gamble. We know that they are going to mess with our heads, without any guarantee about the outcome.

Experiencing the tarot could be as swift and clear as vanishing a coin, only in reverse. It is not that “now you see it, now you don’t”, but “now that it is here, it can’t be unseen”.

MJ: What advice/recommendations/words of wisdom do you have for other poets/Tarot readers?

EE: To read tarot one has to stand on a paradox. To work with poetry one has to practice hopelessness. The best place to learn both is by standing behind the man who stands behind the curtain.

MJ: Below is one of Enrique’s poems that will be featured in the anthology.

EE:
[mandorla, a word for pun]

An ellipse is an eclipse. The ellipse is the lips of two circles kissing, overlapping, over-lipping, wandering around the wunder rim. The mandorla is the intersection, the space across two circles.

A cross is an X. A circle is a silent letter O. Two circles equal O O. If they weren’t silent they would spell “Oh! Oh!”. Taken as two eyes, these two Os look at us as we see ourselves in the mirror every morning, through a straight (straight: that which contains the X trait) line that connects our eyes to their reflexion and renders both equivalent. EQUIVALENT starts with EQUI. EQUIS is the Spanish name for X, which sounds like A KISS and is expressed as X. This demonstrates conclusively (a “conclusion” is nothing else but a l-ess “concussion”) how a mandorla is a gap, a lull, a shift between two stances where “missing dog” and “my seeing dog” are virtually interchangeable.

The mandorla is the graphic expression of puns, giving visual form to the flustered state induced by their ambiguity.

Mandorla is an Italian word for “almond”, that seems like a contraction of two Spanish words: MANDO (command) and ORLA (fringe). A command over the fringe. “A command over” is a comma and over; the precipice of silence over the verge. “Verge” is as closer to “verga” (cock) as “fringe” is to “skirt”. A mandorla shows us that we need two circles to make a door, and the word DOOR agrees.

As ALMOND the mandorla take us back to AL MUNDO, THE WORLD, this is, LE MONDE of the tarots.

Inside LE MONDE‘s mandorla we have a FIGURE, this is, a FIG UR, or U R FIG: “you are fig”. Fig leaves were used by Adam and Eve to cover their nakedness. Out of nakedness God® invented shame. Out of shame, men invented Fashion. A leaf alleviates nakedness because nAKEdness contains an ache that admits no indifference and urges us to do something about it. So, we grab a fig leaf and cover our puDENdum, a word that conveniently hides a “den” right in the middle. This den is our mandorla, a visual element often used to represent the side wound of Christ, and by extension, a bleeding (able ding) vagina. (Outside our game of analogies we reject any comparison between vaginas and wounds, although we cherish how the compression of VAGINA + WOUND would give us VAGAWUND / VAGABOND, the numberless trump in the tarots, also named Le Fou or Le Mat, whose stance teaches us that, if anything, a vagina isn’t a wound on a woman’s body but in a man’s heart).

Beyond the vagina we find the uterus: utter us. (We arrive to the RUS in “uterus” and to the ROUS in “preposterous” by means of the same RUSE). If we subtract the common letters in UTERUS and UTTERED, we end with USED (juiced), a word that should never be spelled to describe a lady, and which anagrams into DEUS (“god”). In the tarots we have LA MAISON DIEU, and DIEU sounds like the Catalonian DIU (says), which would be the equivalent to the spanish DICE. Every word we utter is a gamble in the rolling of our tongue. That is why in English the word DICE denotes a small piece of bone used for laying odds. Both OddS and “bOneS” carry in their bones the French word “os”, which pronounced sounds like “Oh” and means “hueso” (bone), a word as close to “hueco” (hole) as it is to “osso”, the italian word for “os”. One die, one eye, one “Oh!”. Two dice, snake eyes, “Oh! Oh!”. (OS OS = bone bone = bonbon). To think of thin ink as one bone, in Catalonian, “bones” is also “ossos”, and “osos” is Spanish for “bears”, just as the V bears the cross by becoming X, if it stares too long at its own reflexion.

A fig leaf is a wedge, a perfect cotter to mend a cut. A wedge is to an edge as whole us to a hole or a world is to a word. The mandorla’s edge is an Italian “bordo” or an Spanish “borde” that may very well bleed bordeaux. A W is also an X, just as an ex is a double you standing on the sidelines. The figure we see inside the mandorla, her otHERwordLINES concealing her lines, may not be wearing a fig leaf but she is the mandorla’s fig leaf, the tingling that teases the uterus into utterance. To think that women are doors is to think of women’s ardour, the dream that sets the fool after the world.

Through the mandorla LE MONDE conflates Courbet’s  L’Origine du monde to LEMPEREVR‘s shield; a blazon in which the song of “blah” displays the charms of mystery in the form of a parlour (parlor/parler/parlare/palavering) game. The outline of that patch of hair that marks the pudendum, the upper V in the X around the spot, is called a ‘escutcheon’; a word that also names the outline of a coat of arms, the space where the rebus names the knight. “Rebus” anagrams into “rubes”, turning a visual charade into a bumpkin. (The word “bumpkin” turns into a pumpkin by letting the clock run backwards: b = q, and flipping it toward the right: q = p). The rube lacks the capacity to read a rebus, but both rube and knight would be glad to rub one out at night. The word ‘escutcheon’ -a mirror that have us seeing sexual intercourse as jousting, as a bumping of shields- was given to us by Alfred Jarry, who never used it himself. In his infinite wisdom Jarry wrote in French knowing that by doing so he would eventually be translated into English where we will find the word ‘escutcheon’. Everything seems to suggest that he did so knowingly. He had the plans for a time machine.


MJ: Enrique would also like to mention that he only shares his work once a week through his private email list. He says, “People just have to email me, telling me with one os the fastest letter in the alphabet.” Contact him at: enrique.eenriquez@gmail.com

To learn more about Enrique and other poets who will be in the anthology, click here.